Skip to content
Press Enter / Return to begin your search.

This blog post was the last paper/ case study that I wrote in grad school at the University of Tennessee, Knoxville, College of Architecture and Design in my LAR 584 class taught by Dr. Avigail Sachs. May 2018

After 3 years in graduate school trying to define it for myself, I still often find that trying to explain what Landscape Architecture is and what it entails is a curious experience. This problem doesn’t seem as pertinent in architecture, although I can find many an academic who would disagree with me, but landscape architecture is much less defined and is more amorphous. Each student, professor, and practitioner I speak with also seem to have different definitions as well. I find it easier to point inquirers toward existing or built projects that I feel embody what Landscape Architecture means. The projects that I point to are built works that I feel the inquirers have the largest probability of having visited, often, without any awareness as to the origin of the landscape they find themselves in —landscapes that were constructed, not ‘natural’, or in other words, would not have come into being without human intervention. The two projects that I reference both reside in Manhattan, New York City, a place that you might least expect to find two pivotal projects of ‘landscape’ architecture as it is almost completely devoid of pervious surfaces and the native ecologies of pre-colonial America. Central Park and The High Line, the landscapes that I have been referring to, are ubiquitous with New York living. They are both historic and contemporary injections of landscape, respectively, into the concrete hardscape that is New York City serving different but vital roles during the various stages of New York’s growth as a city.

Central Park, designed by Calvert Vaux and Frederick Law Olmsted in 1863, is one of the most recognizable parks in the world. What many don’t understand about the park is that the urban grid of the city was not built around the park but the other way around. The park was completely designed and constructed from the ground up replacing the urban gridded structure that would have developed in its place had the city not held a design competition to find better ways to reuse the recently acquired land between what is now 59th and 110th Streets. Designed to provide the much-needed fresh lungs to a city in dire need of green space for activity, relaxation, and the practice of civility and decorum, Central Park heavily contrasts its surroundings of skyscrapers, streets, and urban hardscape immediately adjacent to lush lawns, an urban forest of trees, and multiple waterbodies. It shows that these seemingly opposing elements of hardscape and softscape can coexist quite well together in our urban built environments. What is amazing is that based on where you are standing in the park, the buildings, sights, sounds, and overall urban chaos of the city completely disappear from the senses buffered by the trees and landscape of the park.

1 | Central Park as seen from above 56th Street

It seems more evident to me now after a few years of studying Landscape Architecture that maintenance and management are vital for our built environment. Our landscapes and hardscapes tend towards ruin and decay if neglected or mismanaged. It takes a good deal of time and effort to manage the landscapes and hardscapes that we build both in our urban and rural environments and without constant attention, they become the ruins we were trying to avoid in their initial construction. As this was almost the case for Central Park, if it were not for the establishment of the Central Park Conservancy in the 1970’s who took on the responsibility of constant maintenance and management, it is very much the case for a great multitude of old and abandoned industrial sites and infrastructures scattered throughout the country that were once historically vibrant during the early-mid stages of the Industrial Revolution in the 19th and 20th centuries, which had no benefactors looking over them after they had served their economic or industrial usefulness. These industrial scapes and infrastructures are often abandoned for several reasons ranging from economic and social forces to the regulatory, but regardless of how these sites became abandoned, to some of the public, they are eyesores in need of deletion from the urban scape to provide room for something else. Others look at these sites as grounds for potential revitalization. 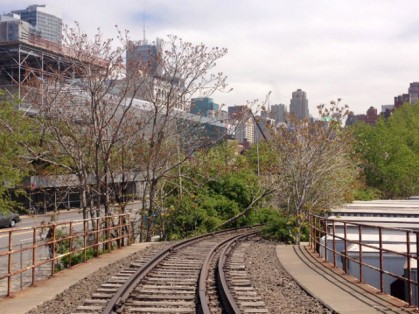 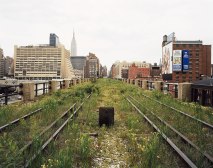 2 | The High Line before revitalization overtaking by ruderal ecology

These post-industrial sites became the stomping grounds for a theory of landscape developed in the late 20th and early 21st century called Landscape Urbanism where Charles Waldheim, a Canadian-American architect and urbanist, advocates for the redefinition of the landscape architect to take on the role of urbanist designing, as Charles states, “Landscapes that are being configured so as to be performatively based as opposed to being formally based.”[1] In a lecture titled ‘Landscape as Urbanism’, Charles Waldheim elaborates on the theory of Landscape Urbanism which looks at “The landscape architect is operating in this mode as urbanist delivering what had been the remit of traditional urban planning or urban designers, but beginning not with historic precedent, not with an analysis of the existing city, not with built form, but rather beginning with ecological function as the foundational element of urban district making.”[2] Taking into account ecological systems, functions, and processes allows landscape architects to establish an environmental approach as an operating system or driver for the base of urban form. 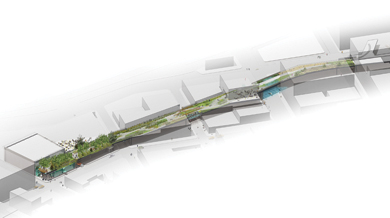 3 | Concept Rendering of The High Line

One of the landscape architects working to put these theories into practice is James Corner, American landscape architect and founder of Field Operations, a landscape architecture and urban design firm. Along side projects like Fresh Kills Park and Tongva Park, Field Operations is known for their design work on The High Line. Commissioned by the Friends of the High Line, an organization formed in 1999 with the goal of saving and managing the High Line, like that of the Central Park Conservancy, Field Operations partnered with architecture firm Diller Scofidio + Renfro, and Dutch landscape and garden designer Piet Oudolf to apply ecological and social performance principles to the aging infrastructure that was the decommissioned railway hovering above lower Manhattan. After a decade of legal battles to save the elevated railway and years of design work, The High Line was revitalized and opened to great fan fair. The elevated railway turned public park and promenade spans 1.5 miles and draws its ecological inspiration from the ruderal growth that was taking over the tracks before its revitalization. Today, it brings 8 million visitors per year and has been accompanied by billions of dollars of development and investment along its corridor.

The High Line is now seen as a major success and many projects point to it as inspiration and precedent for their urban infrastructural revitalization endeavors like the Atlanta Beltline, which started as Georgia Tech student Ryan Gravel’s thesis project, The Camden Highline, and Korea Beltline, but the High Line isn’t the first project to apply principles of Landscape Urbanism. The first ‘rails to trails’ project was the Coulee Verte Rene-Dumont, also known as the Promenade Plantée, in Paris, France completed over a decade earlier in 1993. Designed by French Landscape Architect Jacques Vergely and French Architect Philippe Mathieux, The Coulee Verte Rene-Dumont, implements the principles of Landscape Urbanism, although not directly from written works that came after its completion but of the general discourse of the late 20th century.

5 and 6| Concept Renderings of the Coulee Verte Rene-Dumont

The project revitalizes a long abandoned mid-19th century 4.5 km (3 miles) railway viaduct bridges across the twelfth from the Bastille opera house to Porte Dorée on the edge of the Bois de Vincennes makes it Paris’ longest garden and the world’s first elevated park walkway. This promenade creates a myriad of public spaces along its 45 brick archways that allow for bikers, public performers, arts and craft, and pedestrians to coexist. An article by Metro Paris states that “The elevated park landscaping sports morning glories, wild poppies, cherry trees, lime trees and other blooms organized in splendid arbours.”[3] The plants and ecology selected for the park are meant to create pleasant experiences when strolling along it. Both the High Line and Coulee Verte Rene-Dumont create a rich tapestry of plants boosting the biodiversity of their respective locations. These parks can also be teaching tools meant to help visitors understand that every plant they see that looks like it comes from the side of a highway are actually designed this way and serve a very specific purpose to create a “four-season garden” says Andi Pettis, Director of Horticulture at Friends of the High Line.[4] 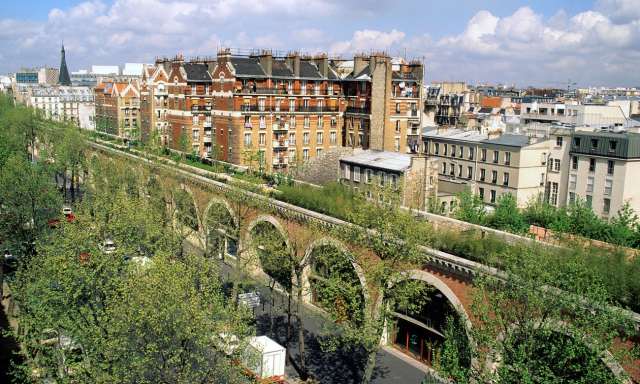 Due to this rich biodiversity, The High Line, Coulee Verte Rene-Dumont, and Central Park require an amazing amount of maintenance that I mentioned earlier. This begs the question, should we be designing landscapes that require so many resources after completed construction? Is it possible to achieve the benefits of Landscape Urbanism without the continued management of the ecologies created? Can the continued succession of the ecologies created coexist with the social programming these landscapes demand? These are questions that landscape architects have been asking for a long time and it seems like they have no clear answers. The urban landscape has already been heavily modified from the ‘natural’ state. These modifications often prohibit the conservation or restoration approaches to landscape as the surrounding scapes and conditions have also gone through permanent changes. The way forward is to design novel landscapes that address the current conditions of the landscape while engaging with and adapting to projected changes. Landscape Urbanism has been a great way for looking at how landscape can address and change urban form embracing the uncertainty while allowing the design to adapt to the fluctuations of surrounding conditions. 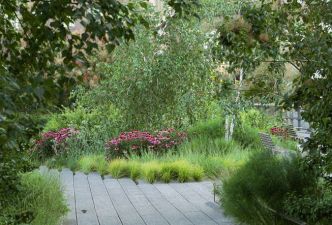 8 | Plants and Ecology of the High Line

9 | The High Line, Showing the Transition from landscape to hardscape

I was born in Nigeria and have lived in Nashville, TN for most of my life. For as long as I can remember, drawing and math have always come easily to me and both emerged as strengths. This led me to pursue and earn a Bachelor's degree in Architecture at the University of Tennessee, Knoxville, College of Architecture and Design. During my architectural education, the marriage of ecology and ecosystems with the built environment and technology became a growing passion. This passion drove my Master's degree path in Landscape Architecture which allowed me to further learn how to utilize the landscape as a design tool for true sustainability. With degrees in both Architecture and Landscape Architecture and a desire to help others any way that I can, I aspire to never stop learning, continue mastering my skills, and better lives through design. View all posts by ptbamson